1a) Bunge, Mario, Philosophy of science: from problem to theory,

1b) Bunge, Mario, Philosophy of science: from explanation to justification,

Originally published as “Scientific Research”, this pair of volumes constitutes a fundamental treatise on the strategy of science.

Mario Bunge, one of the major figures of the century in the development of a scientific epistemology, describes and analyzes scientific philosophy, as well as discloses its philosophical presuppositions. This work may be used as a map to identify the various stages in the road to scientific knowledge.

Philosophy of Science is divided into two volumes, each with two parts. Part 1 offers a preview of the scheme of science and the logical and semantical took that will be used throughout the work. The account of scientific research begins with part 2, where Bunge discusses formulating the problem to be solved, hypothesis, scientific law, and theory.

The second volume opens with part 3, which deals with the application of theories to explanation, prediction, and action. This section is graced by an outstanding discussion of the philosophy of technology. Part 4 begins with measurement and experiment. It then examines risks in jumping to conclusions from data to hypotheses as well as the converse procedure.

Bunge begins this mammoth work with a section entitled “How to Use This Book”. He writes that it is intended for both independent reading and reference as well as for use in courses on scientific method and the philosophy of science. It suits a variety of purposes from introductory to advanced levels. Philosophy of Science is a versatile, informative, and useful text that will benefit professors, researchers, and students in a variety of disciplines, ranging from the behavioral and biological sciences to the physical sciences.

BUNGE, Mario, Philosophy of Science. From Problem to Theory, Volume one.

Part I  Approach and Tools

HOW TO USE THIS BOOK

This is a treatise on the strategy and philosophy of science. It is an attempt to describe and analyze scientific research, as well as to disclose some of its philosophical presuppositions. This work may then be used as a map to identify the various stages in the road to scientific knowledge. It is an update of the author’s Scientific Research (Berlin-Heidelberg-New York: Springer-Verlag, 1967, 1973).

This treatise is divided into two volumes of two parts each. Part I, the Introduction, offers a preview of the scheme of science (Ch. 1) and some logical and semantical tools (Chs. 2 and 3) that will be used in the sequel. The account of scientific research proper begins with Part II on Scientific Ideas. In the beginning was the problem a subject studied in Ch. 4. Then comes the tentative solution to a problem that is a hypothesis (Ch. 5). Next, the hypothesis assumed to reproduce an objective pattern, i.e. the scientific law (Ch. 6). Finally the building and readjustment of systems of hypotheses i.e., theories are examined in Chs. 7 (with emphasis on structure and content) and 8 (with emphasis on construction). This closes Vol. 1, From Problem to Theory. Vol. 2 opens with Part III, Applying Scientific Ideas. Ch. 9 deals with the application of theories to explanation and Ch. 10 with their application to prediction and retrodiction. Ch. 11, on rational action, belongs to the philosophy of technology. Finally Part IV, Testing Scientific Ideas, opens with observation (Ch. 12) and goes on to measurement (Ch. 13) and experiment (Ch. 14). The jumping to conclusions from data to hypotheses and conversely (Ch. 15) completes Vol. 2, From Explanation to Justification. Look at the structure: 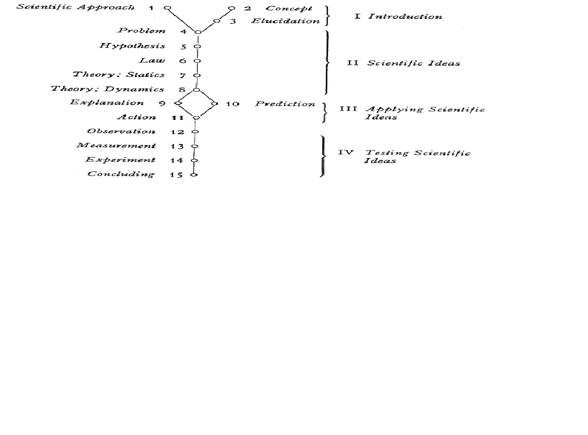 A look at the logical relationships among the chapters as displayed in the previous diagram should help the reader to use the book and understand the philosophy of science it proposes.

*The paragraphs between asterisks may be skipped in a first reading*. What should not be omitted are some of the problems appended to every section. Their purpose is threefold: to test the reader’s understanding of the text, to shake his belief in it, and to invite him to advance the subject. There are more than a thousand such queries. Every problem set has been ordered roughly according to difficulty: the first few are usually exercises whereas some of the last are research problems. In assigning them the instructor should first appraise the background they require.

Quarrels with fellow metascientists have for the most part been avoided in the text and left to the problems. Bibliographical references, too, have been relegated to the problems and to lists at the end of every chapter. As a consequence every section resembles an uninterrupted lecture. With appropriate cuts each volume will cover one semester.

The book has been planned both for independent reading and reference, and for use in courses on Scientific Method and Philosophy of Science. Since the text oscillates between an introductory and an advanced level, it may suit a variety of purposes. For one thing, the book might be used as a substitute for formal lectures which anyhow would seem to have been rendered somewhat obsolete by Gutenberg. A lively discussion of the text and some of the problems, as well as of the results of exploring the suggested bibliography, should be more interesting and rewarding than a paraphrase. Warning: Any book on our subject is apt to make irritating demands on its reader: he will be asked to sail back and forth between the Scylla of science and the Charibdis of philosophy. The author sympathizes with the traveller but he cannot offer apologies; instead, he will state the truism that shipwrecking can be avoided either by abstaining from sailing or by training in the skill. May the present book be of help to those who feel seasick at the mere thought of having to learn some science, and a rough guide for those who wish to take a closer look at the beast. Let it be recalled however that no travel guide can make the journey for us.